A downloadable game for Windows, macOS, and Linux

In the depths of a dark and unforgiving forest, an exiled princess whiles her time in solitude. For a girl raised in the lap of comfort, the woods are impossibly harsh, and day-to-day survival is the most she can manage. One day, however, a mysterious, beautiful maiden appears, throwing her world out of its already delicate alignment. The princess is instantly captivated by this stranger, and begins to fancy herself the heroine of a fairytale, even as the maiden proves herself to be less and less of a fantasy.

Foolish princess. She should know by now that her life is no fairytale.

In seven days, the wheel of fate will splinter. Seven days, for better or worse... Cassidy, the protagonist. A exiled princess and the eldest child of the Veromere royal family. Cassidy is nice, but rather clueless and struggles to live on her own due to her pampered upbringing. Elowen, the mysterious beauty who appears before Cassidy one day. While at a glance she is graceful and beautiful in an otherworldly way, she is also quick to anger and rather self-centered. Sometimes, she becomes quiet and a little gloomy when staring out at the woods outside the cottage windows...

There's also a 40 page booklet for anyone who pays over $5 as a token of our appreciation! Included:

The writing/programming is done by Lorelei, while the art, design, and graphical assets are by Laniessa. Laiska is on editing/testing duty! WaV's music is all composed by ExPsyle and Kana's Sound Factory (old demo only). Trailer narration by Natalie van Sistine. Published by Bellhouse.

Content Warning: This game contains violence, graphic depictions of death, gore, homophobia, implied incestuous themes and codependency. This list is in no way exhaustive or complete, and not everything listed is present in every playthrough. Please exercise caution while playing.

I just completely finished Without a Voice and I just wanted to say I could see the huge amount of effort and love put into this project and I cannot wait to see what you will be producing in the future.

I just finished getting all of the endings and this game is so beautiful. All of the bad endings broke my heart, but the good endings were so lovely that it makes getting them all the more satisfying. I downloaded and played the game on steam but I've also happily purchased it here as well so I could get the beautiful artbook. <3

i really enjoyed this!! i'm currently trying to get a happier ending :( but wow!! this game is really beautiful with a great story!! super enjoyable, and congrats on the release!! <3

edit: i just got ending 8 and i could not be more pleased :')

I was wondering how you can get bad ending 1 and 2? They seem to be the hardest to get...

Congrats on the release!!!!

I find myself utterly unable to get endings 2 and 8! Any hint, please? ;D

Ending 8 is the ending you get when you don't trigger the other endings - it's not too important but being a little nonsensical might help. For ending 2... try feeding into Cassidy's paranoia.

I am having the same problem xD, reply to me if you manage to get one of those.

i had a hard time with those too lol... there's a guide to how to get each ending in the artbook if you can afford throwing 5 bucks at the devs!

if not, i'm not sure what would be good advice for getting ending 2, but i think getting ending 8 takes a delicate balance of having cassidy believe the best of elowen/not dwell too much on her ~true nature~ while Also not completely giving up faith in alexander. at the "what's cassidy's final impression of elowen" choice i had all 4 options which had never happened before in my other playthroughs.

Oh dear, I spent another 2 hours yesterday trying to get those two missing endings... and I couldn't manage it. I've had all four options too and yet they did not make a difference.

It's nice to know that there's an artbook with a guide but right now it would be really irresponsible for me to spend money since I got sent home to be in lockdown without my paycheck :(

To the devs: you just released this and I'm already yearning for another game from you ;D

Ahh you can do it!!! Another tip for ending 2 would be, hmm... Cassidy needs to figure things out, while having a healthy dose of mistrust towards everyone around her.

Is there any changes in first demo-days, or they can be skipped?

There's a little bit of updated CG directing and art! I think most of the text is the same but, (probably bad to admit this), I'm not entirely sure!

Well yeah it looked pretty much same to me. But thats ok.

And btw with this overly-complicated nonlinear system i really suggest you made a simpliest walkthrough to answer further cries and complaints - just plain list of choices for each ending.

Oh also, thank you so much!!

Is this still in development? I just played the demo and really want to see where the story goes.

Oh, I hope you enjoyed it! It definitely still is in development, I just finished off the last event illustrations yesterday! It might take just a little longer, but I hope you'll play the full game too~

Yay! It had been so long since your last comment/update I was a little worried. I'm definately planning on getting the full game when it's availible.

You're off to a terrific start. The slight but consistent changes to Elowen's expressions (especially the lips) is to die for and what really make a VN pop. Keep up the great work!

I can't tell you how excited I was to see that this game updated!! I'm so glad that you are still working on it, and the new demo is really great - although the narrative didn't seem to change too much from the first (as I was hoping, it's a promising/interesting start), it's good that the choices become more dialogue-based. The visuals are beautiful and the story is so mysterious and enchanting.  I can't wait for the full release!

Wow. This game is nice :D . Amazing art style and great sotry. I can't wait to see it complete :D

I love the artwork and the UI in the game. Nice work keep it up, I can't wait for more.

Beautiful art, and I like the story so far! Can't wait to see what you have in store for us with the full version!

This is a really beautiful game.
I really like the art style, mechanics, portraits to indicate who is speaking, background, story arc, characters, and all the options in the menu you can choose from.

When I first went through the game however I noticed the exact same as Crowthorne did about the limited options in choosing.
It feels like you can only choose how Cassidy is feeling about events (I counted and you have only one option for different movements instead of emotions/feelings in the demo).

What I also noticed is that the save system doesn't have an indication for the process of the game.
(You don't know where in the game you are)
Maybe you can introduce a percentage or day system or something.

Anyway I am really looking forward to the game.
(let the romance start already!) ;)

Thank you so much for the feedback! We're working hard on the full version and I think there's some things that people will like!

I will definitely consider the save system info - I'm thinking of maybe putting in playtime as a piece of info into the save slot? That being said, I'm not great at coding so I'm not sure if that's viable. Maybe chapter titles?

Thanks so much again! I hope you enjoy the full release.

Wow. I was REALLY impressed by this demo. The art is beautiful, and it's evident that your writer is well-read from the quality of the prose. I'll eagerly await the full version!

Thank you very much!!! We hope you'll enjoy the full game as well!

I really liked this. The music is quite beautiful and fits the tone of the game well, the art is gorgeous (the backgrounds remind me a little of Odin Sphere, which I haven't really played but was very impressed with the background art of when I saw it), and the writing is evocative and polished.

The starting point was a little confusing the first time. I didn't even know what Cassidy was exasperated by or tired with, when I was making the choice...

The choices in the demo didn't feel that significant (a lot of them being what Cassidy thinks while doing the same thing), the first time playing through, but I did notice one of the earlier choices actually removing an option from a later choice, so I'm guessing the full game may have more significant ones. I wouldn't really mind playing what amounts to a kinetic novel that's yuri and looks this pretty, either, though.

Either way, I'm excited to play the full game. I still have lots of questions, and the demo mostly just raised more.

P.S. The in-game link to this itch.io page during the demo ending doesn't work, sending you to "https//l2.itch.io/wv" (missing a colon). Also, I think "Elowen's" here should be "Cassidy's"? Still a stunning level of polish, though.

Thank you very much!!! It's really flattering to be compared to Odin Sphere wah ;o; Thanks for spotting the mistakes, we'll definitely snipe them for the full release!

Lore is doing some pretty cool stats for the in-game choices and there are a number of significantly different endings! It's a short game but there a ton of variations, even in the demo alone. We'll try our best to get this released soon! 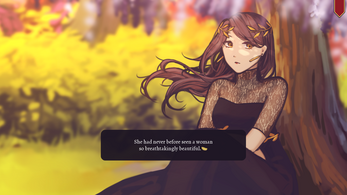 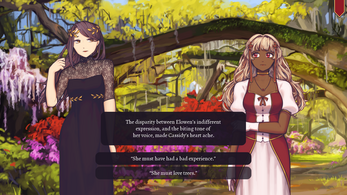 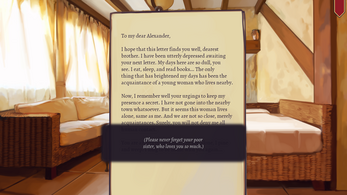 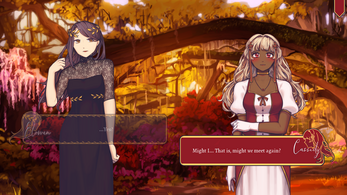 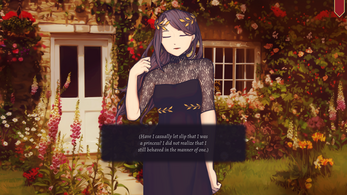